Barbara and her art work. 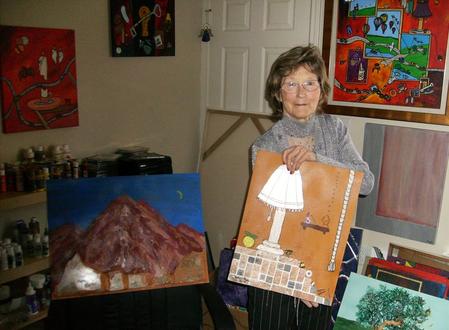 When it was time for college, I chose Atlanta Christian College in East Point where I had grown up and lived during my days at Russell.  While I could have lived at home, I decided to live in the dorms with other students working on campus in the kitchen to pay for my education.   I married while in college and dropped out after my junior year when I learned I was to have a baby.   After my three children (two daughters and a son) were nearly grown, I completed my education.

When my children were 12, 11 and 6 years old, my family moved to New Zealand for three years, where I was a teacher.   Later, I taught in Florida schools.  Then, for a number of years, I went into a different line of work in Florida as a Private Investigator.   Eventually I became the manager of a large security firm with 300 guards.   I also learned to shoot very well!   Yet teaching was still part of my life as I trained security officers for the state of Florida.  Finally, I returned to East Point as the Principal of Pathway Christian School, which was the best move of my life.   I loved being back in Atlanta and I loved the school. In time, I also received my Ph.D. from Jacksonville Theological Seminary.  I am now retired from Pathway Christian School.

I enjoy painting and sell some of my artwork.  I have 6 grandchildren.  This summer (2009),  I plan to move from Atlanta back to Florida to be close to my daughter.