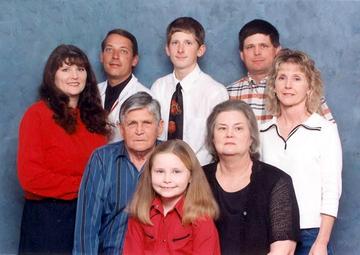 After graduation, I continued working at East Point Glass Company. In June of 1960, I married Kate Yates from Bowdon, Georgia.  In 1961, we moved back to the farm in Alabama began producing eggs and beef cattle.  From 1962 to 1968 I was Justice of the Peace. In 1967 I sold the egg business and went to work with the State of Alabama Department of Agriculture for the next 30 years.

I remained in the cattle business until 1997 my son took over when I retired, since then we traveled to Canada, Mexico and all the states several times, except we haven’t made it to Alaska.

I smoked to long and I now have emphysema and am disabled.

We have a son, Eugene, born in 1961 married Naomi Taylor, he works for Auburn University Vet School and continues to operate the farm.  He has 1 daughter, Taylor Blair. Our daughter, Regenia. born in 1963, married Glenn Barninger.  She teaches math at Oak Mountain School in Carrollton, Georgia and has 1 son, Harrison Barninger.