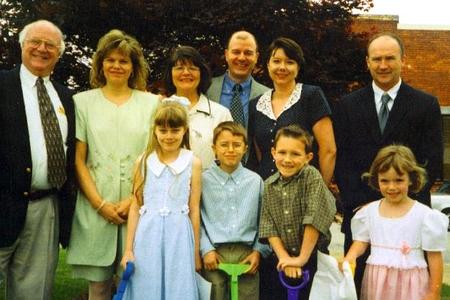 After Russell, I attended the University of Georgia and received my BS Chemistry degree in 1963. Brenda Grantham (RHS '62) and I married in the Fall of '63 after I accepted a position with International Minerals and Chemical Corp. in Atlanta where I worked as an analytical chemist from 1963 until 1969. I joined Atlantic Steel Co. in Atlanta as a Sr. Analytical Chemist in 1969 and was promoted to Chief Chemist in 1974. An opportunity to join Michelin Tire Corporation arose in 1977, and we moved to Greenville, SC. By then we had two children (Chandler born in 1964 and Shelley in 1966). After completing a year of training in France, I returned to Greenville as Laboratory Manager of Michelin's Corporate Manufacturing Chemical Laboratories. I joined Union Carbide in 1985 as Corporate Lab Manager of the Electronics Division in Greenville retiring in 2003. A month after I "retired",  I accepted a position as Lab Manager of Natural Sciences and Engineering for the University of South Carolina in Spartanburg (now USC Upstate) and finally retired from full time work in 2007. I still do some consulting work in chemistry from time to time.  My son graduated from UGA and received his law degree from Mercer University. He was subsequently admitted to the Georgia Bar and is presently Corporate Counsel for Southwire Corporation in Carrollton, Georgia. My daughter graduated from Greenville Technical College and is a medical technologist with the Greenville Hospital System.  We have four grandchildren ( Erin and Jackson, my son's children and Christopher and Kelsey Alverson who are my daughter's).  My daughter lives a short distance from us in Fountain Inn, SC. Brenda occupies her time keeping our two grandchildren here.