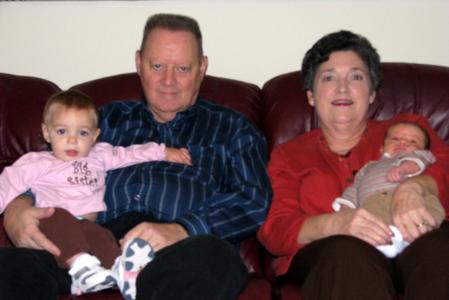 On March 28, 1970 I married Edna Swinson and after 39 years we have two children, Eddie West (31) and Laura West Timmons (27), and two grand children, Mary Beth Timmons (2) and Jackson Cobb Timmons (7 months).  We moved from College Park Georgia to Fayette County in July of 1978 and have lived in our current home ever since.

Edna and I are both active at our church, Flat Creek Baptist, where I have served in various spots over the years, Bus Driver, Chairman of Transportation Committee, Chairman of Audio Visual Committee, several terms as Deacon, two terms as Chairman of Deacons, assisted with the “Promise” class (mentally challenged), and etc. Edna has served in various positions over the years.  For the last few years she has served as children’s department director and has taught four-year-old weekday school at Flat Creek.

Hobbies over the years include Shooting and hunting, hand loading to support shooting, casting bullets, computers (building and fixing), working on vehicles (mostly ours), flying (private pilot), photography, Welding, etc.  Someone once asked me “What do you do in your shop in the back yard”.  My answer was “almost anything I want to”.