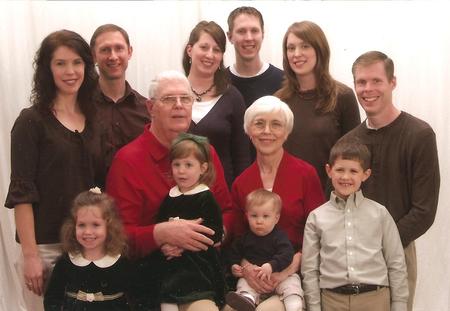 My years at Russell were short as I came at the beginning of my junior year.  Though brief in time, those years provided many wonderful memories and helped me to see the value in going on to college.  In September 1959, I entered West Georgia College.  Two years later, I transferred to the University of Georgia in Athens and graduated in May 1963 with a BS in Secondary Education with a proficiency in health, physical education and science.  In July 1963, I married Margaret Purcell, and we began our life together in the southwest Atlanta area.   In September I joined the staff of North Clayton Junior High as a health and science teacher.  It was an exciting time to suddenly be on the other side of the desk and have the opportunity to influence and teach young people.   In 1967 another exciting event occurred – our first child, a son (John), was born.  His sister, Melinda, arrived three years later in 1970.   During this same time period another interesting event occurred – Mr. Deck, newly retired from Fulton County, came to teach at North Clayton Junior High!  That was an experience I had never anticipated but enjoyed immensely.   Who would have ever thought that Mr. Deck who had taught my mother and was my high school principal would one day become a fellow teacher of mine!   Having a desire to coach I joined the coaching staff of Westwood High School in Fulton County in the fall of 1972.   At Westwood I coached football, basketball, and tennis.   Later on when Westwood consolidated with Lakeshore becoming Westlake, I became the Athletic Director and head football coach as well as the track coach.   During those 21 years at Westwood/Westlake, I returned to UGA for additional degrees.  Each time it broadened my ability to teach a new subject.  One of the subjects I enjoyed teaching was Driver’s Education as it gave me one more opportunity to mentor students not just in learning to drive safely but to encourage them in many other aspects of life as well.  Our family’s size also increased over these years with the addition of two more children:  A son (Stephen) in 1978 and a daughter (Elisabeth) in 1980.  This brought our family to four children – two sons and two daughters.   Today two of our children (John and Elisabeth) are high school teachers, one is a youth pastor in Lynchburg, VA (Stephen), and one is a home schooling stay-at-home mother (Melinda).  Collectively, they have given us four beautiful grandchildren – two boys and two girls!  In 1993 I retired from teaching, and in the years since, I have enjoyed a part-time job that allows me to travel periodically.  My wife, Margaret, has taught four and five year old children for the past 25 years and will retire at the end of this school year.  I am sure that she has plans for us to travel to visit our grandchildren more often in the days to come!

A couple of interesting notes:  Our son, Stephen, who is a youth pastor in Lynchburg, VA is an avid runner and in high school ran both cross country and track.  As a teenager he met Howard Dial at many a road race and always enjoyed their meaningful conversations.  During those years, Stephen felt God leading him into the ministry.  It was an encouragement for him to meet someone like Howard at that time.

Our daughter, Melinda, while in high school at Colonial Hills Christian School met Mark Justice, son of classmate Carroll Justice.  At that time, Carroll and I had lost touch with each other, but in 1989, Mark and Melinda were married.  Today Carroll and I are granddads-in-common to their two children Garrett and Megan