Following graduation from Russell in late May, 1959, I spent the summer working on the assembly line at the Ford Hapeville Plant.  Paying a little over $2.00/hour, they literally worked my rear-end off:  I went from 210 lb to 190 lb in 9 weeks!   I definitely learned something:  That I didn’t want to spend the rest of my life on the assembly line!

I entered Georgia Tech as a Regular Naval ROTC student in September, majoring in Chemical Engineering.  After a decent Freshman year, I decided that I wanted to eventually fly jets in the Navy, and changed my major to Aeronautical Engineering.  The following spring, my vision went to 20/40 and I was told I wasn’t visually qualified to be a naval aviator.  ‘Changed my major to “Applied Psychology”, and planned to work in the relatively new field of Human Factors Engineering.

I graduated from Georgia Tech in ’63, was commissioned Ensign, U.S. Navy, and went off to San Diego to serve as Communications Officer on a destroyer.  A year later, I met my wife-to-be at a formal Navy Ball.  Two weeks later, my ship headed to the western Pacific (shortly after the Gulf of Tonkin Incident).  Back to the states 7 months later, I soon asked Marilyn to marry me, and we were wed in San Diego October 9, 1965.  We moved to Japan in December and lived there for 7 months in a truly tiny Japanese house with a nice view of Mt. Fuji.  I was gone on a ship, off the coast of Viet Nam, about half the time, but we had a wonderful time exploring Japanese cities and small towns when I was in port.  In 1967, I left active duty and returned to Georgia Tech to work on a master’s degree.  ‘Took a job at Lockheed, Marietta; got laid off in 1970; moved to California and worked for Litton Ship Systems on the design of a new destroyer being built for the Navy.  Moved to Mississippi to continue working on that program in 1972, and then back to California (San Diego) in 1973.  About then, my dad asked me when I was going to settle down and get a “real” job!

We were fortunate to reside in San Diego in the same house for 19 years while our two kids made it all the way through high school.  At first, I commuted daily from San Diego to Anaheim, 105 miles each way to work on a really fun Navy ship design program at Autonetics Division of Rockwell (I caused the oil shortage of 1973).  From mid-’74 through the end of 1976, I was site manager for a small training group in San Diego (training people who were going to serve on the new ships I worked on from ’70 – ’73).  More Navy advanced ship program work followed:  A 3,000 ton surface effect ship (90 knots and the length of a football field), which Congress canceled in 1980.  Laid off.  Took a job with Lockheed in San Diego working advanced ship design for three years before landing at General Dynamics, where I worked on the Advanced Cruise Missile program for the Air Force (8 years).

In 1992, I accepted a transfer to General Dynamics Fort Worth Division, in Texas, and I worked various aspects of the F/A-22 “Raptor” (fighter/attack) until I retired on April Fools’ Day, 2004.  A highlight of those years was when I was awarded a U.S. patent for the “Panel-Aligning Fastening System”.   Unfortunately, my cheap-skate company refused to finance prototype hardware to properly evaluate the concept.

After leaving Navy active duty in 1967, I remained in the ready reserve for almost 20 years, retiring in 1986 as a Captain.

Marilyn worked as a travel agent, specializing in cruises, from 1993 – 2003.  Her boss frequently “required” her go on cruises so that she could sell them with confidence.  Somebody had to carry her bags, so I volunteered to tag along:  The Caribbean, Alaska, the Panama Canal, Baltic, Mediterranean, Africa, Greek Isles, etc.  Eleven cruises, total.

Two years ago, we took a “Grand Circle Travel” tour of Eastern Europe, and in May 2007 we flew to Anchorage, AK, and used “Alaska for Dummies” to plan a really fun ten day self-guided tour.  We usually spend at least a week in California each year, and a couple of weeks in Georgia.  My mother turned 91 on March 23, 2008, and she resides in an assisted living facility in Fayetteville.  My older brother, Don (Class of ’55) and his wife live in Riverdale, and they keep a close eye on her.  Younger sister, Debbye, Class of 1967, resides in Virginia with her husband and son.

We bought a 34’ motorhome in 2002, but after two trips to California and one to Georgia and several in and around Texas, Arkansas, etc., we decided that we preferred either flying and renting a car (or traveling in a comfortable car), eating in restaurants, and staying in motels!  Then, in late 2008, we got the RV bug again and bought a 27 foot 5th wheel trailer.  ‘Back in the saddle again.

Singing has been an important part of my life, from doing solos in church at the age of five to singing in the “Gold Robe Choir”, the Georgia Tech Glee Club, The Miss Atlanta Show, and many church choirs.  Currently, I sing with the Granbury Civic Chorus.

Our son, Eric, 35, resides in Alvin, TX, near Houston, about 6 hours away by car.  He teaches developmentally disabled boys and his wife teaches choral music.  They have two girls, ages 6 & 3.   Our daughter, Lauren, 36, resides in Grapevine, TX , near the Dallas/Fort Worth Airport, about 65 miles from Granbury.  Lauren is a full-time mom/part time organic food distributor and her husband is an engineer at Lockheed-Martin. They have a daughter age 8, and a son, 5. 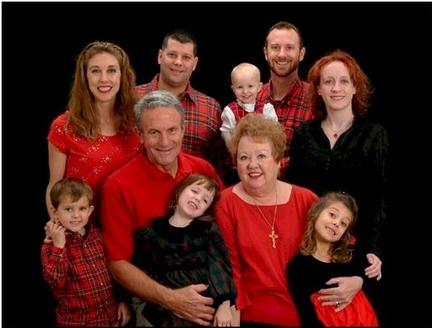