Upon graduating from Russell High school in 1959,  I starting looking for work. I was hired by Genuine Parts Co.  I went to work to learn the auto parts business. After a few years, I was promoted to branch manager. I also bought my first house and got married. My wife and I have just celebrated our 57 th wedding anniversary. We have two grown sons and three grand children.

My career with the company continued to go well and over the years I managed a total of four stores in the Atlanta area. I was promoted to Sales Manager, and then worked in operations, supervising 12 local stores.

In 1978 I was promoted to Local Manager. I was sent to Cincinnati Ohio to run the company owned stores in that location. I returned to Atlanta in 1985 and continued working in sales and management. I retired in 1998.

Since retiring, my wife and I have moved from the Atlanta area to the little town of Bremen in West Ga. We have some property and a garden spot. That along with the house chores and yards keeps us busy.

In retirement, we have done some traveling thru the U. S. I also got more involved in Golf. I played off and on when I was working, but in retirement, I started playing in outings and tournaments. Thru the years, we traveled to just about all the States in the Southeast playing the game.For the most part, we still enjoy good health for our age and plan to keep on keeping on as long as possible. 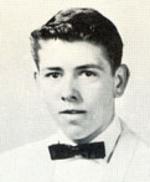