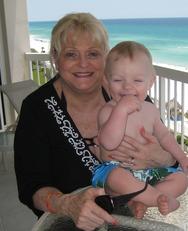 After graduation from Russell High School, I started working for Liberty Mutual Insurance Company in Atlanta. In January 1960, I married Marion Wesley Owen, a 1954 graduate from Hapeville High School.  Wes was working for International Harvester Company in East Point and attending Georgia Tech at night school.  In late 1960, our first son, Keith Vincent Owen , was born.  My career with Liberty Mutual ended and in January 1962, our second son, Kelly Lane Owen was born.

In 1968, with my sons in grammar school, I started working for Delta Air Lines.  I worked for Delta until I retired in 1993.  During that period of time, my third son, Asa Vaughn Owen, was born in October 1974 and my only daughter, Tara Leigh Owen, was born in 1977.  Working for Delta afforded me the opportunity to take my family on many fabulous trips and vacations.  We went Christmas shopping in Seoul, Korea a number of times.  We went to Hawaii on numerous occasions.  We visited Rome, Paris, London, Copenhagen, San Juan, St. Thomas, San Francisco, Los Angeles, Washington, New York, Disneyland, Disneyworld, and made many trips to Las Vegas and Phoenix, to name a few spots.

In recent years, I have dabbled in the antique business.  I am very active in the Peachtree Doll Club.  I also work sometimes in movies as an extra.  I have had  fun in movies with Matthew McConaughey, Burt Reynolds, and Toby Keith.  I also participated in a made for TV series.  We also own and manage rental properties.

We also have been blessed with our first grandson, Asa Vaughn Owen II, born in June 2007, and our first granddaughter, Ava Lee Owen, born in August 2008.  They are so much fun to play with, and we enjoy them very much.  We didn’t know what we were missing!!

On May 31, 2007,  my husband Wes, after 52 years of service, retired from International.  In January of this year, we celebrated our 49th wedding anniversary.  We are very much enjoying being retired.