Following graduation, I went to work for Square D Company in Atlanta as an electrical products assembler.  After winning the singing contest at the East Point City Auditorium, I was able to make a local recording, produced by Ray Stevens, from which I made an appearance at Avondale High School in 1960. This is where I met my first wife and we married in 1961.  I was then given the opportunity to record on ABC Paramount records in 1962, 1963, and 1964, by a fellow I had met on the Georgia Jubilee by the name of Felton Jarvis. Felton chose the name Vince Everett as my stage name, which was the name of Elvis’s character in “Jailhouse Rock”. “Such A Night” was the most popular recording that we made. On the Paramount recordings, I had the opportunity to work with some of the best talent in the music industry, such as Floyd Cramer, Boots Randolph, Jerry Reed, Ray Stevens and the Jordanaires. These experiences are among some of my fondest memories.

I was drafted into the United States Army in 1966 and was sent to Ft. Benning Georgia for Basic Combat Training.  There I qualified and volunteered for Artillery OfficerCandidate School.   From Ft. Benning I was sent to Ft. Ord California for Advanced Infantry Training. After Ft. Ord, I was sent to Ft. Sill Oklahoma for Artillery Officer Candidate School. I received my commission as a Second Lieutenant after OCS and was sent back to Ft. Benning with orders to join the 197th Light Infantry Brigade as an Artillery Officer. When I arrived at the 197th there were no open slots for Artillery Officer and I was then assigned to the 1st Training Brigade at Sand Hill as a training officer (located in Ft. Benning, where I had gone through Basic Training). I was made Assistant Personnel Officer after approximately 4 months. My first wife and I divorced in December of 1968. I was released from active duty as a First Lieutenant in November of 1969 and returned to Square D Company in Atlanta.  Married again in 1971 to Martha Warr and we had a wonderful daughter named Michelle in January of 1973. I continued on at Square D Company for a total of 33 years before the plant was closed in 1992. My second wife and I then divorced in 1996.

My daughter married Scott Young from Bremen Georgia in 1994. From that union I now have four delightful grandchildren, three boys and one girl, ages 13, 12, 6 , and 3 who live next door to me in Buchanan, Georgia. I spend some of my time gardening and taking care of the animals which have been acquired over the years – horses, dogs and cats.

I feel very blessed for the opportunity to see and talk with some of my former classmates at our upcoming 50th Russell High School reunion. And I would like to send a huge thank you to all the people working so hard to make this reunion happen.

Marvin Benefield took the name Vince Everett from Elvis's character in the film 'Jailhouse Rock'. He was signed to ABC-Paramount Records and released a string of fine Elvis style records, and even used The Jordanaires as his vocal backing group. 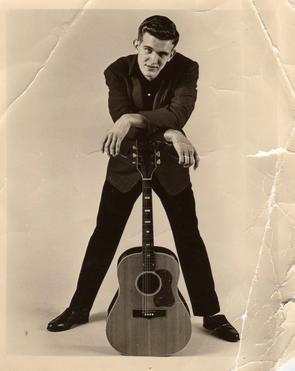